This weekend I led an Arduino workshop as part of Pittsburgh Code & Supply’s Starter Series. It was a lot of fun, and I thought I’d write down some of my thoughts.

The workshop materials, including slides and samples, can be found on Github.

Writing the code and drawing circuits for the samples took a lot of time.

I wanted to have a sample circuit and code for each of the sensors/components that we would be working with. While none of these samples were very complicated, this still took quite a bit of time as I had figure out how the component worked, draw the circuit, and then come up with the code.

I don’t really think there’s any way around this, and it really was helpful to have a sample for each component readily available.

We managed to set up two projects and screens in the room — one for the slides, and one to show the demonstration circuit. This worked out very well, as I didn’t have to continuously flip back and forth between the slides and camera on my computer. 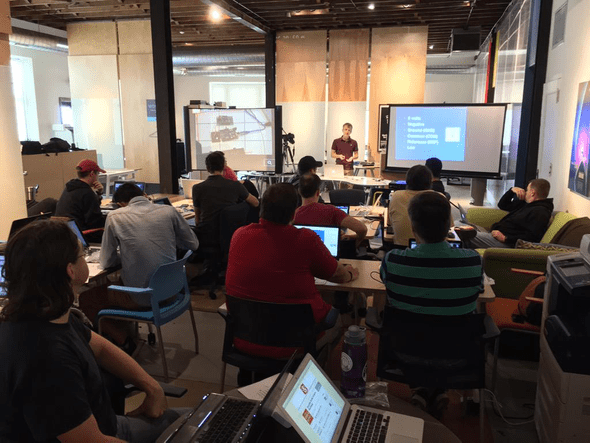 I was fortunate to have two people who were experienced with Arduino and electronics help out in answering questions. With 20 people attending the class, it would have been much more difficult (and stressful!) to try to answer all of the questions by myself.

I found that people who had not built/prototyped circuits before on a breadboard really benefited from a more personal walk through of building their first circuit. After that, everyone got the hang of it and moved on to trying out some of the other sample projects.

Everyone stuck around and hacked.

It was really cool to see that everyone was interested, and stuck around to try working with some of the different sensors and other components. I was worried that folks might be bored after 3 hours, but a lot of people stayed and worked for almost 4 hours! Which was really awesome!

Overall, the kit wasn’t too bad. Everyone got their own components, but we also had some components to share: 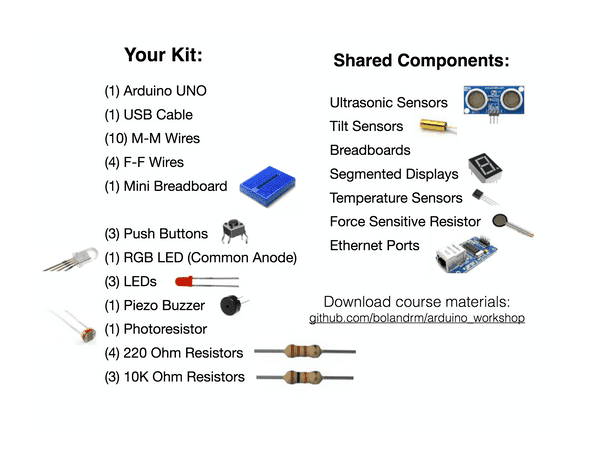 If I were to do this again, I’d probably make the following changes: